Hit enter to search or ESC to close
ImportantsInterviewsLGCNews

TRANS-AMERICA: Meet the woman who’s skating solo across the US

By Valeria KechichianOctober 23, 2017 No Comments

It is with great pleasure we introduce you to Calleigh Alice Little, a long distance and downhill skateboarder who is currently crossing the United States of America and who is about to set/break the following World Records: First Transgender Woman to Cross the USA,  First Woman to Skateboard Across the Country Solo and Fastest Known Time Skateboarding Across the USA. We had the chance of having a short interview before she left, talking about life, skateboarding and inspiring others. 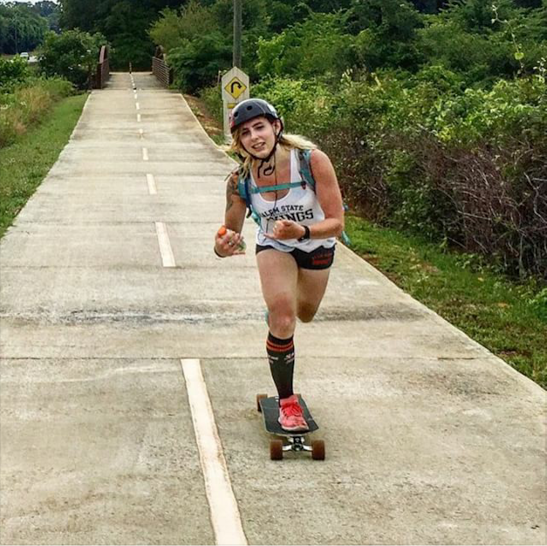 Hey! So I am from a suburb of Boston in Massachusetts. I grew up there and lived in the city for a few years before I decided to move to San Diego, California to get better at downhill skating. Outside of skating you can find me riding my motorcycle, building websites, or binge watching bad TV.

How long ago did you start skating?

I started skating maybe 8 or so years ago. I always skated to school, and that didn’t change when I went to college. I always only did long distance, but I learned that as I started taking longer trips that there was always going to be some serious downhill for me to skate along the way. I skated across 4 state lines bordering Massachusetts before I even knew that people actually raced! 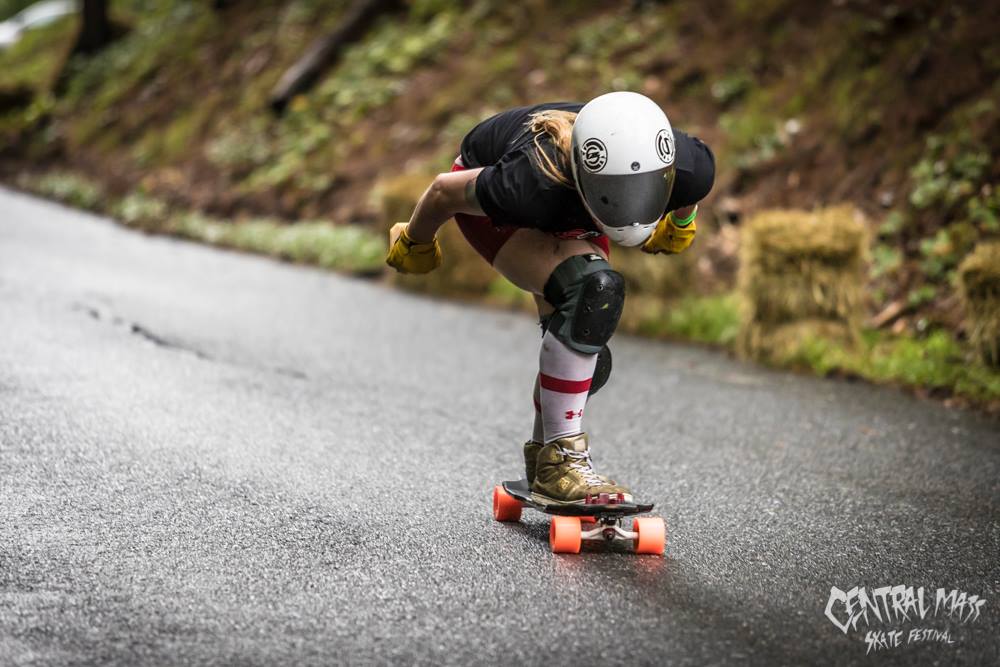 And what about competitions? Was it as soon as you started skating?

I only started competing about 2 years ago. My first race was the Central Mass Skate Festival. When I went, I didn’t know anybody there, and was so scared of being judged for being transgender that I competed in the open division instead of women’s. I ended up missing my race heat anyways, but got to see how great the skate community really was. From there I started doing long distance races. My first was the Miami Ultraskate, and I placed 2nd with 172 miles over 24 hours.

I loved competing so much that I decided to dedicate my life to skateboarding ever since!

I bet it must have been a pretty tense moment for you before that I can imagine. How did it go with the judgement? Was it as you were picturing it?

Nope, actually I was so scared I didn’t even really talk to anyone. But when I competed in long distance, I knew it was going to be more of an issue especially with an international event like the Ultraskate. So I had my doctor make a copy of my hormone levels showing that I was no different from any other girl, and had a psychologist sign a document saying she believed I was experiencing “gender dysphoria” and that I am certifiably a woman.

Overall I have received little to no judgment, but I know that once I start breaking world records and winning these races I’ve done well in, the world will have something to say. I’m not concerned. 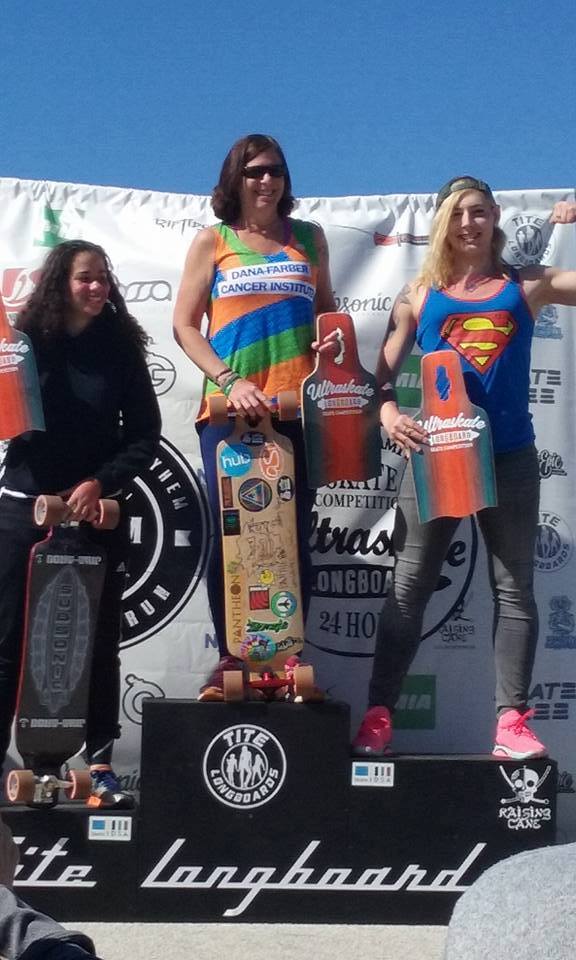 The skate scene in general can be a bit hostile for women, how did you feel that as a trans girl?

I think I have an “advantage” when it comes to that – I’ve experienced companies who want to share my media because being trans is “gimmicky” and sells in today’s society. Also not to mention I lived 22 years as a man before finally admitting to the world who I really was, so a lot of my “male tendencies” are hard habits to break. I think, in some cases, I get along with everybody and have the same respect as any other person.

What was your first long distance skatetrip?

Sort of a hard question to answer, it really depends on what you consider long distance. I know people who think 5 miles is more than enough. My failed trip to New York City I mentioned earlier was definitely my first “adventure skate.” 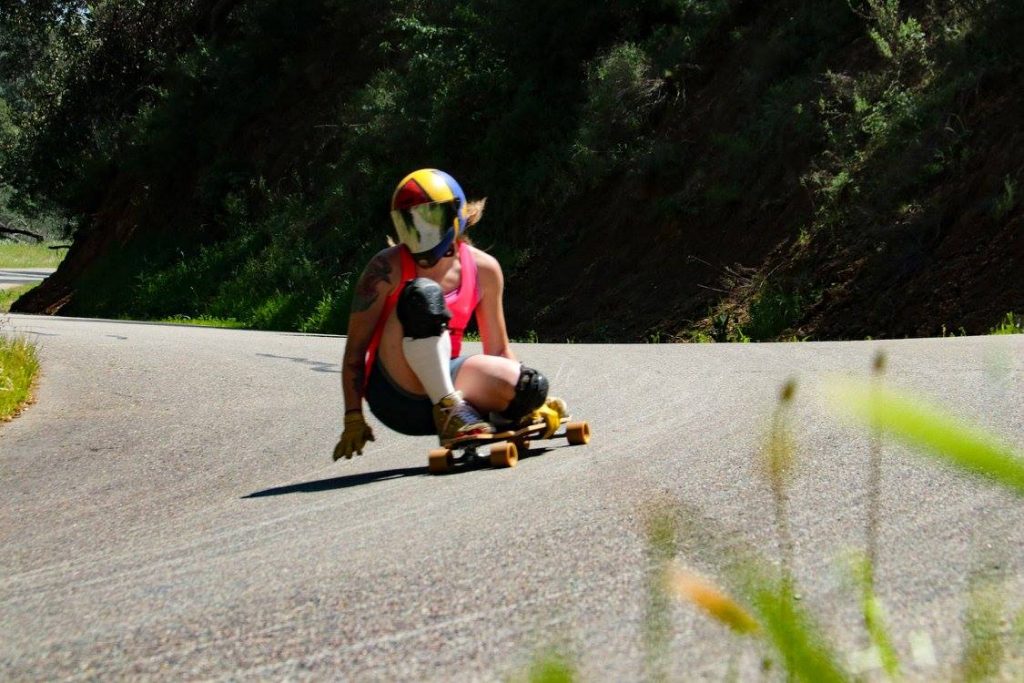 What about the trip you are starting on October 9? Where are you starting and were are you ending?

On October 9 I will be departing from Bend, Oregon and heading east to Massachusetts on my board.

Why those places as starter and as an end?

I chose Bend as my starting point for a few reasons. Jack Smith, an established long distance skater who has skated cross country multiple times, came through Bend towards the end of his trips. I think I stand to learn a lot from others who have made the trip possible before, so I am willing to take past experiences and make them work for me so I can achieve the “Fastest Known Time” world record.

I chose Massachusetts as the finish because that is where I grew up. I think it will be great to end in a familiar place, with family and friends. I’d really love to have a huge party to celebrate! But in my life now, I’m lost between jobs and questioning the meaning of everything, so it will be good to end up in a place I know I am loved.

Definitely the best option as a place to end! Friends and family sounds awesome. What do you think that this trip may change inside yourself?

Well I think I’m going to gain the appreciation for the world I truly need. It’s so easy to fall into a routine – go to bed early, wake up and drive to work, come home and make dinner, stare at the tv, count down the days to vacation….it all just seems unreal. I truly believe the world is a good place and I just need to see it with my own eyes.

I was recently let go from a job that stole my intellectual property and left me with nothing. It has been hard to bounce back. Instead of eating two meals a day, I can only have one, and I have to buy the 2 in 1 shampoo/conditioner instead of the good products…little changes that add up and make me question what the point of it all is. Instead of jumping back into the work force, I need to get myself mentally and physically able to do it. I think this trip will grant me the ability to take nothing for granted. 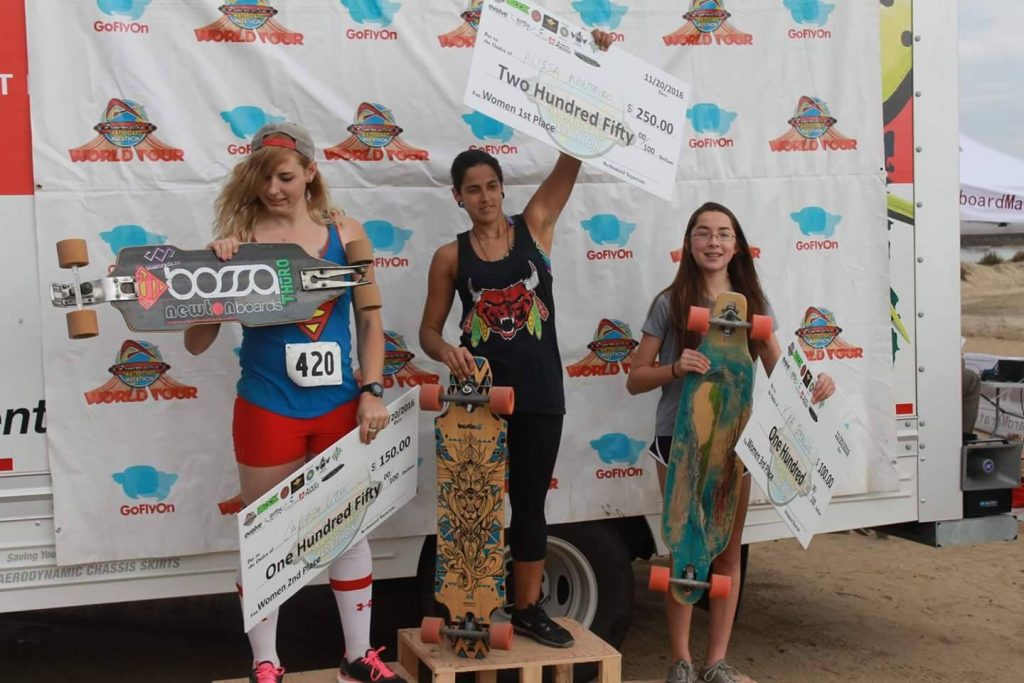 Why do you think that there are not so many trans girls in the longboarding scene?

Well, when I first revealed myself to the world, I had never met another trans person before. I was convinced for most of my life that I was the only one who felt that way. I think that the world has begun to open its arms to the LGBT community, and I wouldn’t be surprised if trans people became a commonplace.

It’s definitely a goal of mine to show the world that there’s nothing to be afraid of, you can be yourself, and you can achieve your dreams no matter what your identity is!

What are the things that you consider important to do to encourage other trans girls to chase their dreams?

Well I think that just putting myself in the spotlight and going for a goal nobody else wants to try is a great start. I think that leading by example is how I want to pave the way towards a more accepting, welcoming world. It’s not enough for me to just compete. I need to be number 1, and I will continue to fight for it. I have this recurring dream where a young trans girl finds out that a transgender woman dominates the leaderboards – imagining that I could impact somebody to face their fears and be themselves for the first time is what keeps me motivated. 🙂

That was great to read. I hope you have a blast in the next adventure (and all the others that will come). It was great talking with you Calleigh! ♥ 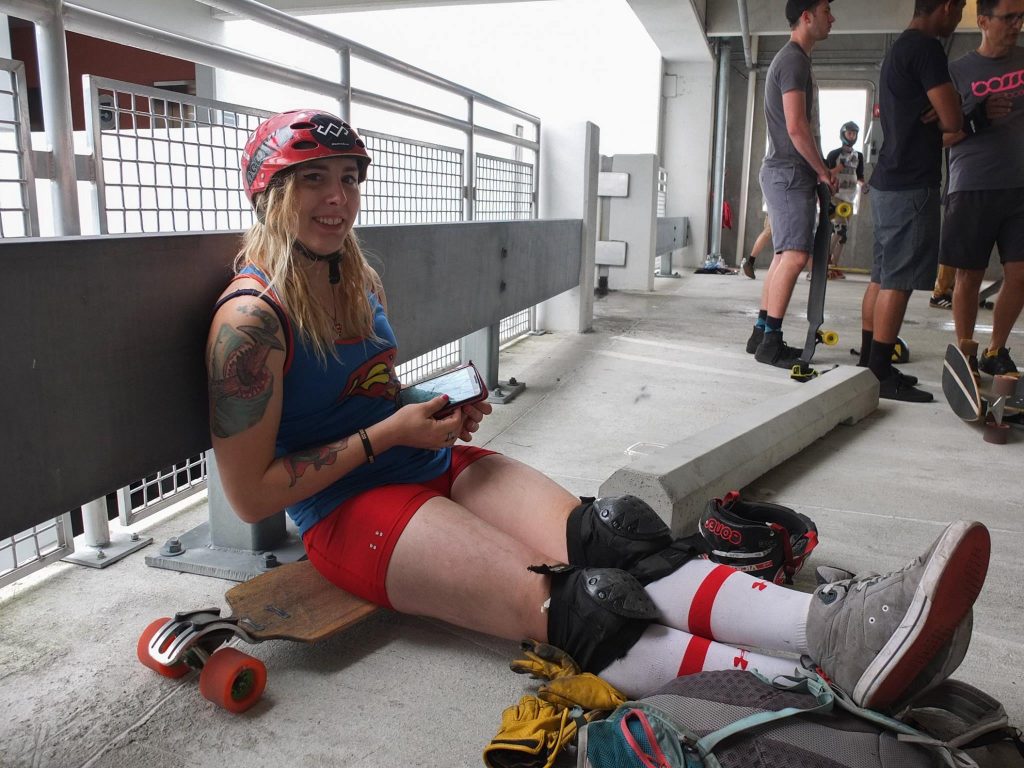