Hit enter to search or ESC to close
ImportantsInterviewsLGCNews

By Longboard Girls CrewApril 17, 2015 No Comments 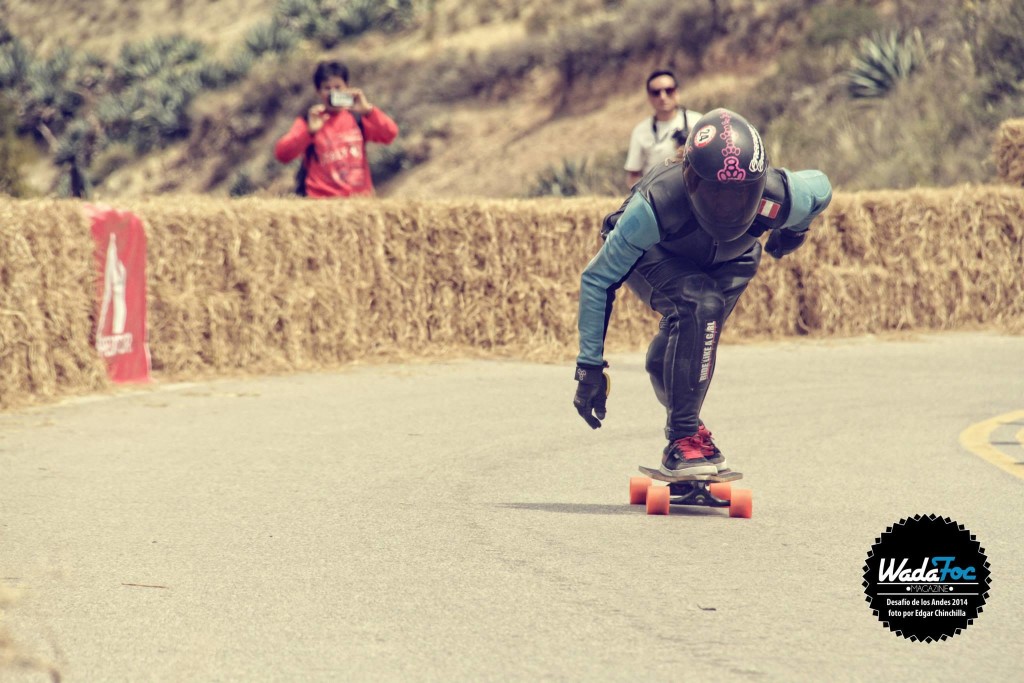 Hi Giorginna! How is it going? Full name, age and location, please!
Everything is really good! I am 20 years old, from Lima, Perú. I feel blessed by my country’s geography and having the ‘Cordillera de los Andes’ through it and with that having awesome spots.

Who did you skate with the first time?
4 years ago with some friends, I was the only girl in the crew. There were a couple of ladies skating too but I didn’t know them yet.

How many girls did you know at that moment and how many now?
The first girl I met was when I went to my first championship (dec/2009). By that time I only knew Daniela, but after each one of us skated with their own crews. I retired for a year, and I saw many girls practicing and that fascinated me. I came back at the middle of 2011 and the Longboard Girls Crew thing started, I think that helped a lot and encouraged many more girls to start skating. We were no longer 2 or 3, now you could see a group of 5 or 6, almost all of them wanted to race.
During all this time I think we have done a pretty good job, spreading the sport among girls. Between Girls meet, longboard clinics, Sunday pushing, etc.
Not only in Lima which is the capital where the majority of the girls live, but also within the country in places like Cajamarca, Trujillo, Arequipa, among others.
Currently we have around 60 girls in the LGC Peru database.

Who inspired you to skate?
I could say I was inspired by the speed haha. When I started to skate I didn’t know much about the girls’ level in other countries, but I could say that I looked up to our champion Felipe Malaga.
After that I saw Katie Neilson’s style and fell for it.. undoubtely  she is a girl with tons of style and a strong rider. 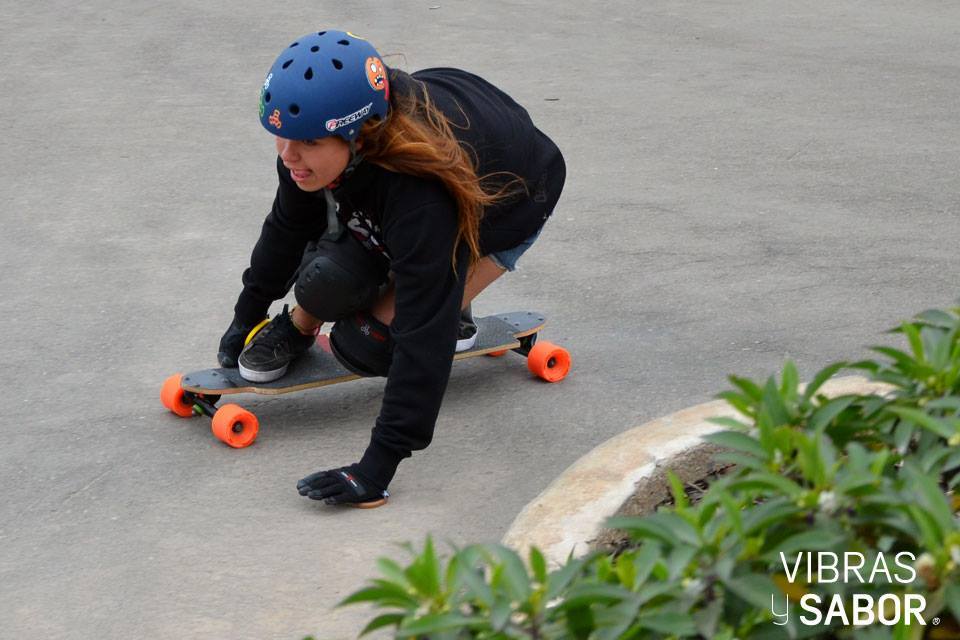 When did you first know about longboarding?
5 years ago, I thought it was a fascinating sport. I started taking pictures, I have never skated or anything like it, but ever since I used the first longboard 4 years ago… I fell in love with speed! My first experience with longboarding was through downhill. I did a spot nearby my house. Feeling the speed, the wind against me, the adrenaline through my veins… that is love haha and I have been doing it since then until now.

You’re into downhill, right? Any other discipline?
Downhill is my life. I knew longboarding through downhill championships, and my first experience on a board was doing downhill.
It’s my life style, that thing of wanting to go faster and faster is an addiction hahaha.

Some freeride?
Awww freeride, I think it’s amazing to be able to go fast and spinning, sliding on the asphalt and doing it with style. The thing is that I have always done downhill and I focused on going fast and just that hahaha even though I do brake at some point (we call them checks)… but I can see myself freestyling in some fast tracks, I just need to practice more.

Can you describe the local crew?
It’s improving with more and more, getting stronger as a community. We have grown so much in the past few years thanks to the APDS (Downhill Skateboarding Peruvian Association), the level has increased and that has been thanks to the competition level that we have here. We have a national downhill championship, it has between 5 and 6 dates per year and there is a national champion at the end of the year per category.
It is more frequent now to have slide jams and that’s pretty good because we are encouraging the style.
And we can’t even describe how much the girls’ level has increased, it is just incredible! 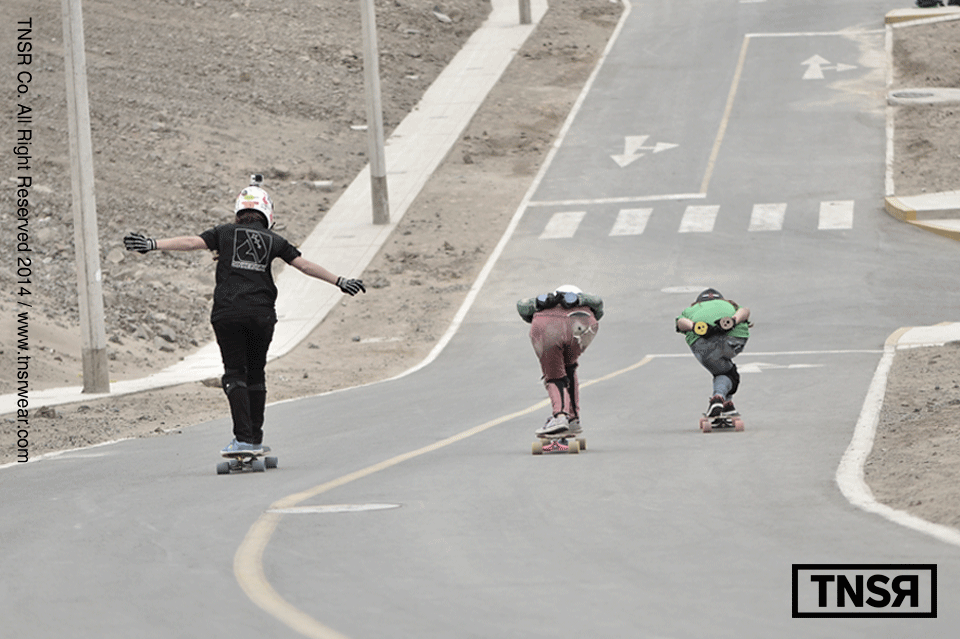 Have you traveled abroad? Where to?
Last year I traveled for the first time to compete in Montañita – Ecuador, a Peruvian crew went there to represent the country. I finished first in the women category, the runner-up was Vale and then Daniela, they both are from Peru too. Traveling was very good, getting to know another sports’ culture in that country, meeting more people that skates and meeting other girls (they were just beginning to do downhill) but they were pretty good at freestyle. I made some really good friends and went to some incredible spots.

Which place did you like the most?
I have only been to Ecuador, but I loved it and I also made very good friends. That is why I went back at the end of last year, I went there more in the tourist plan, I was not able to skate that much because of a knee injury that kept me away from the sport for about 4 month. I had a blast!
During that trip we had a LGC activity with the girls there, to encourage the sport. We hosted the I Girls Meet with LGC Ecuador, I think it went great, I tried to teach them a little of what we do here. During the beginning in Peru there were only 5 girls skating, tops, and now we are plenty.
Without any doubt the landscapes, beaches and people are awesome over there. Hopefully I can go back soon!

What about the spots… which ones are your favorites among your local spots? Top 5?
About the local spots so to name them, which I always look forward to the weekend so I can skate there, I’m not classifying them because they are fast, technicals or hard. This is only ranked on how much I like them haha

1. Nuclear
My favorite, I love it. It’s like a mini Maryhill hahaha I always have so much fun in this spot, its cornes awww, it’s not that fast… but it’s perfect for the weekend with my friends, doing downhill.

2. Quilmana
It’s local, but it’s a little bit more than 2 hours and half away. It’s fast and I like it, it has a couple of corners where you are going very fast but you only need to keep your tuck. At the end of the sesh we always do the spot but to the other side, it’s a resistance track of almost 10k hahaha. As long as I’m going fast, I’ll be happy!

3. LaTiza
Boooooooooooooo, this could be my favorite spot because it’s the fastest one. Once I reached 95 km/h but you could easily go faster than 100 and when the wind behind you it’s much better. It’s an incredible drop, it makes your bearings go to the top… I love it!

4. Molina
When nobody in the crew is up for any of the other spots, I just skate nearby my house. I have good pavement and small but fun spots. Laguna and Ovalito are more chill but they help me to train corners. Golf and Planicie are faster, I’m always careful of the cars.

5. Centinela Hill
Boom! This spot was like a dream to me, fast, with incredible turns and it was always pretty interesting that not everybody had done it. I went there for a championship and woooow, it was great, pure speed. The bad thing about this track is that you can only do it during the early morning because is when there aren’t any cars passing by. 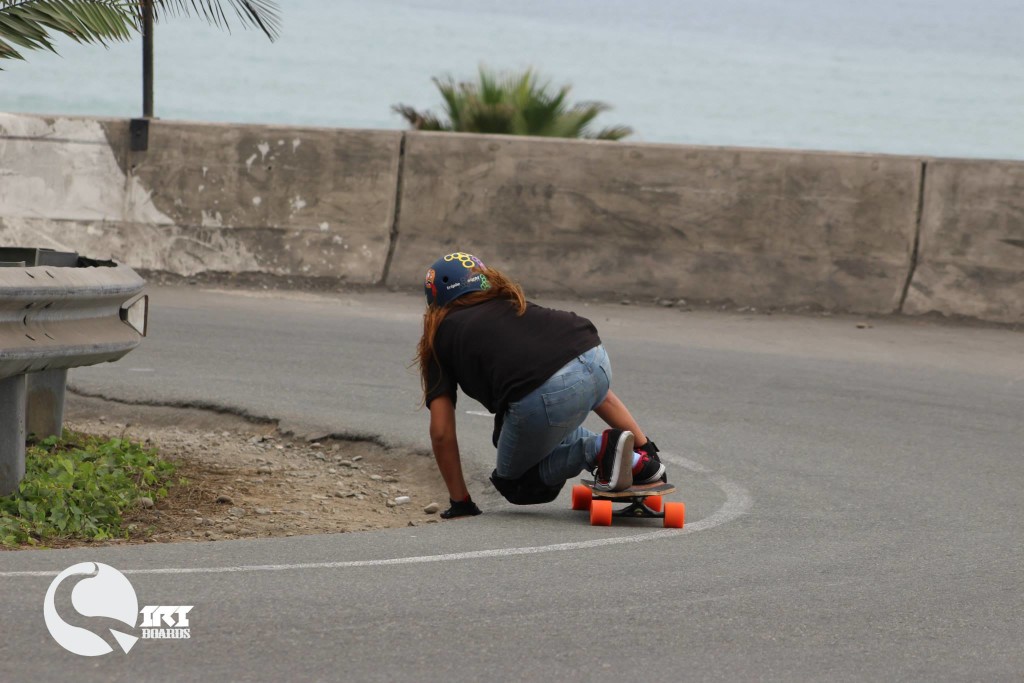 How do you see the north America girls?
Complete rad girls, I can see myself skating with them. Elena is pretty technical, Katie has plenty of style, they both skate so hard… I want to increase my level and be able to represent my country giving it all.

Which one would you say is your idol?
Katie Neilson, she is the best for me without doubt hahaha

Do you have any sponsors at the moment?
Yes and I’m pretty grateful because they keep trusting me. FREEWAY SKATE SHOP,TRIPLE 8 Peru, FOR EXTREME, DGO LEATHER SUITS.

What are your longboard plans for this year?
Increasing my level, being fast and technical, I’m working on that.
Go and race, I have to travel and give my best. This year I can see myself racing the South American races, Festival de la Bajada and I also hope I can make it to Brazil. I also have the races in Peru because last year I was out due to an injury.
Continue promoting the sport as usual, helping with anything I can.

And for life in general?
Study a lot and have a good performance at university, continue doing my best in my sport and lots of SKATE! Get a job skate-related haha 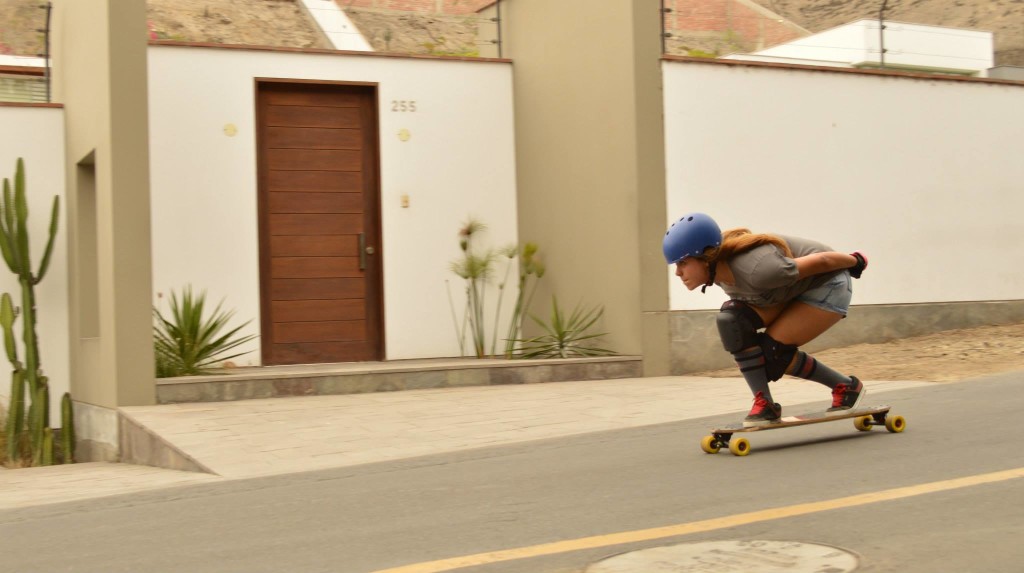 What do you do in your life? Study, work…
I’m in university, I’m studying Marketing. Right now I’m only doing that but I can see how I work for LGC Peru, I’m always doing everything for the crew, taking care of the future activities, the girls and everything else.

Well, this is a free space so you can do whatever you want in it. Curse, write in taiwanese, or just say hi to your mom 🙂
Thank you for the interview and LGC for having this space so I could talk a little about me and share a little about the crew in Peru. There are so many gifted girls here, they are rad, Valeria, Graciela, Ruth, Daniela, Fiorella and so many new talented girls like Zulema who are just amazing. I’m very happy with everything we have accomplished together with Natalia in LGC Peru, thanks to all those who support us and follow us on Facebook.
I want to talk about SAFETY, here we say … SAFE DOWNHILL, I SWEAR! Our sport is extreme, falls are a common thing but we have to foreseen them. Always wear your HELMET, and all the other safety gear… It’s just not only that, especially for those of us who practice downhill and we take turns at high speeds, corners that sometimes have blind spots, we have to be extra careful with cars, always be attentive of your surroundings.
Have all the precaution measures regarding the practice of our sport. I only have something left to say, I love what I do and I can see myself doing it for the rest of my life… Ride to live, Live to ride… that’s it haha. 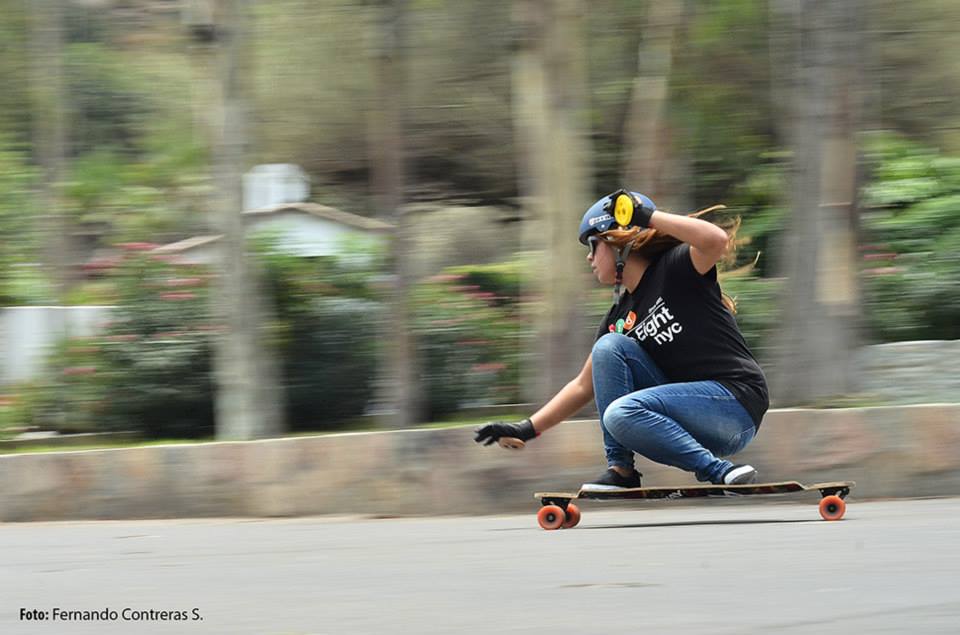 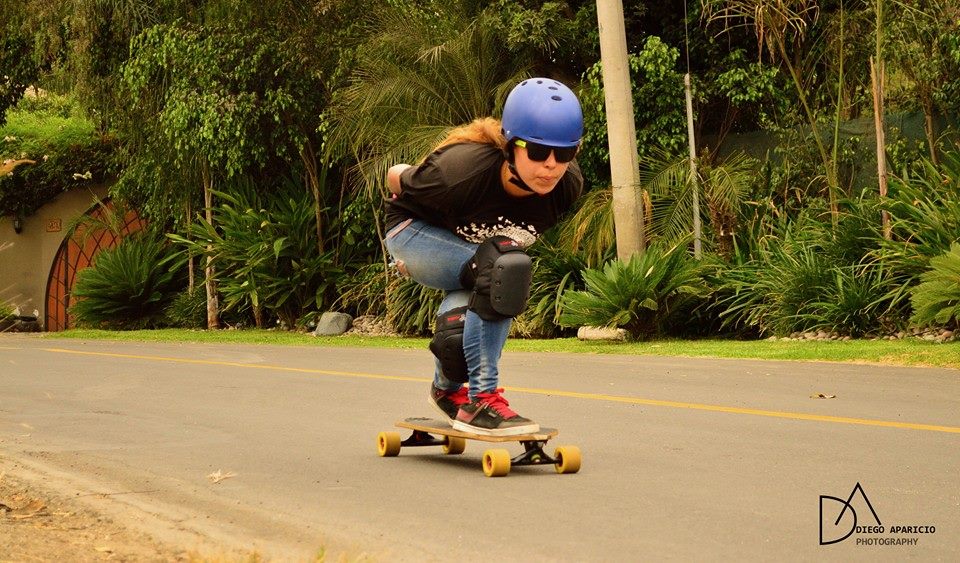 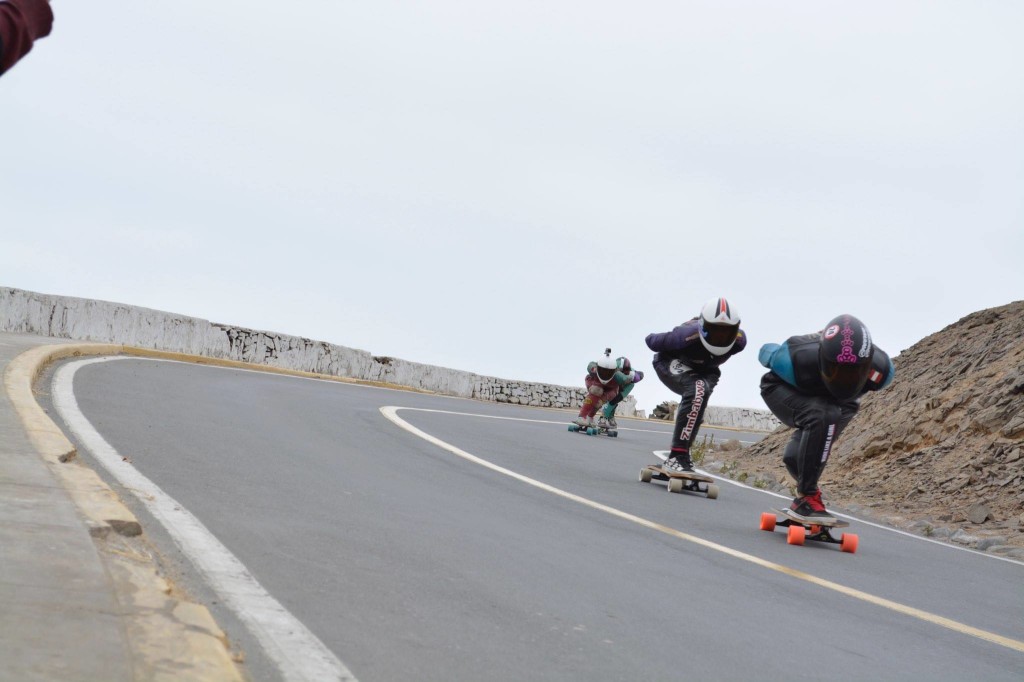