Hit enter to search or ESC to close
NewsTripsValeria Skatetrips

Greenskate is one of the biggest longboard events worldwide. Its celebrated in more than 63 cities in 5 continents and most of them happened some weeks ago. Greenskate has been promoting longboarding as an effective form of environmentally friendly transportation and recreation since 2007. It was founded in Calgary Canada amongst a handful of friends.

Concrete Wave Skateshop invited me to Cologne to what would latter be the biggest Greenskate celebration till date. They’ve been organizing the event in Cologne since 2011 and every year gets bigger. This year we were more than 1000 (wtf?) longboarders cruising the city and making a statement. 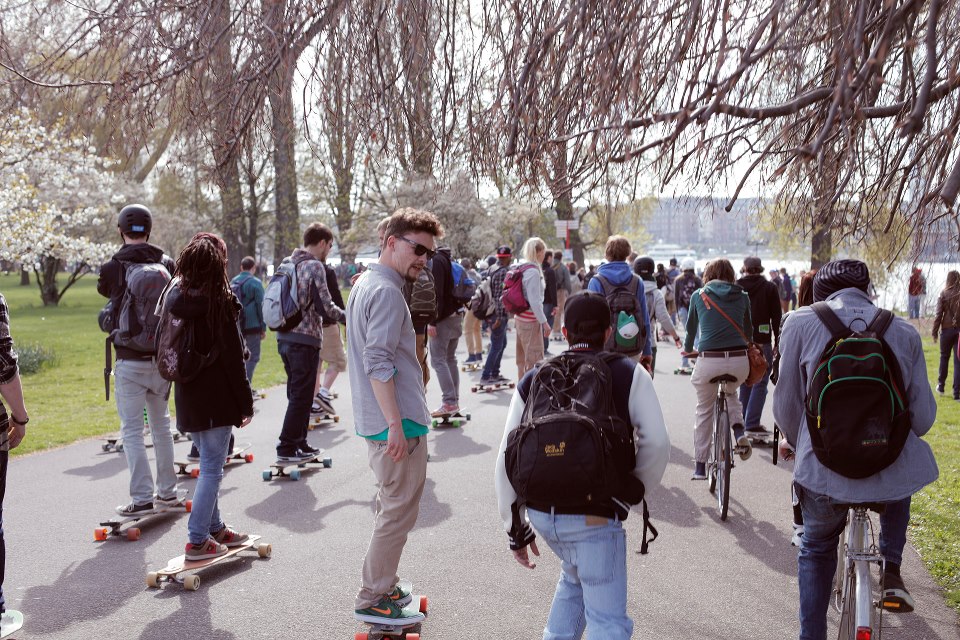 I arrived to Cologne on Thursday evening after a stop in Munich to find myself waiting for my luggage at the airport belt. Needless to say, if I’m mentioning this it’s because my bags with my two favorite boards never came out. Yay Lufthansa! My lovely friend and LGC German ambassador Janine La Franca was waiting for me and we made it through the crisis, as apparently Lufthansa’s employees are not used to my loud Latin screaming. We already had big plans for a skatepark in Dusseldorf that night so headed from Cologne to Dusseldorf with some other lovely humans, Theresa & Akasha. Lucky me three different friends took an extra board with them to see if any suited me. In the Pavel indoor skatepark we met with Heiko (Concrete Wave Skateshop owner), Ed & Stephan and had an amazing time. It was one of the best skateparks I’ve ever been, and the bowls were just sick. They had two bowls, two miniramps and a big street area, all indoor. Why can’t we have stuff like that in Spain, dammit?!

We spent Friday cruising and hanging out at the Concrete Wave Skateshop, which recently opened a beautiful new area for chilling & having lunch. Anna is in charge of the bar and does the most delicious homemade food. I wish I could eat her cookies 24/7. 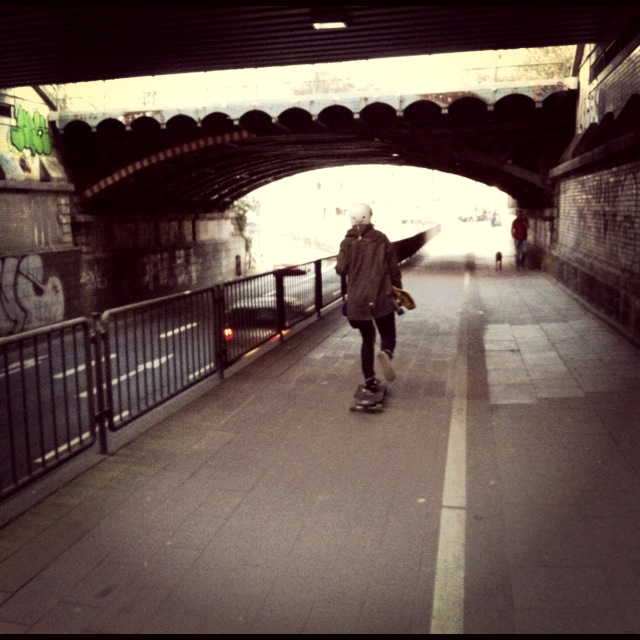 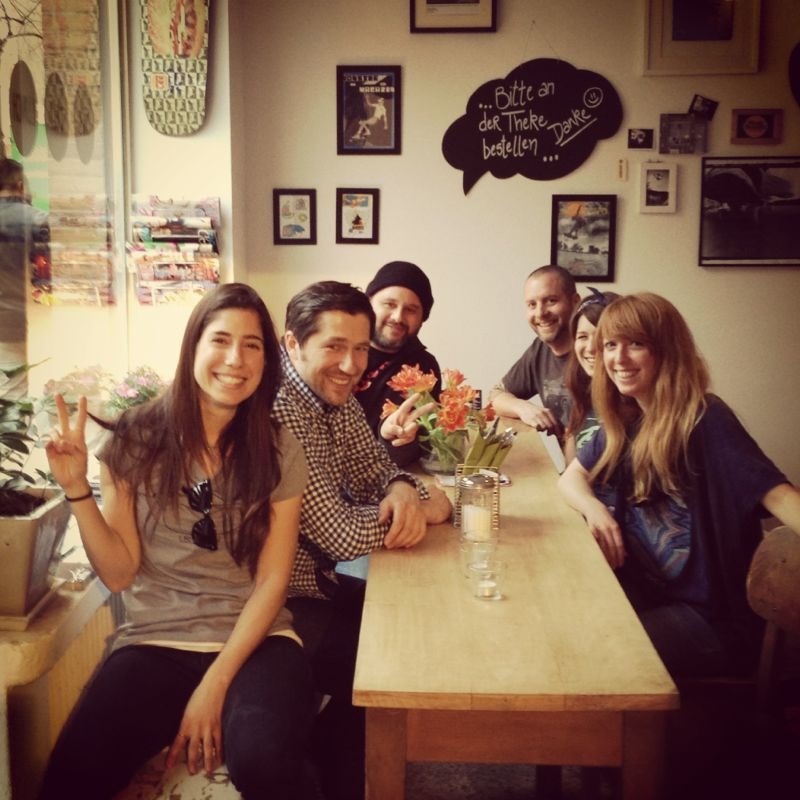 We left to visit our good friend and awesome photographer André Kniepkamp to the hospital as he broke his Achilles tendon toeside-sliding some days ago, so it was the best possible timing (I guess it’s always a bad time to break a tendon, anyway). Later we met lovely Dani Schukalla, who’s also a German LGC ambassador and went for beers with Heiko, his gorgeous girlfriend, Ingo & Stefan from Icone Longboards and crazy cow Markus a.k.a. Cactus, who has the most brilliant tattoos ever. Or maybe not. 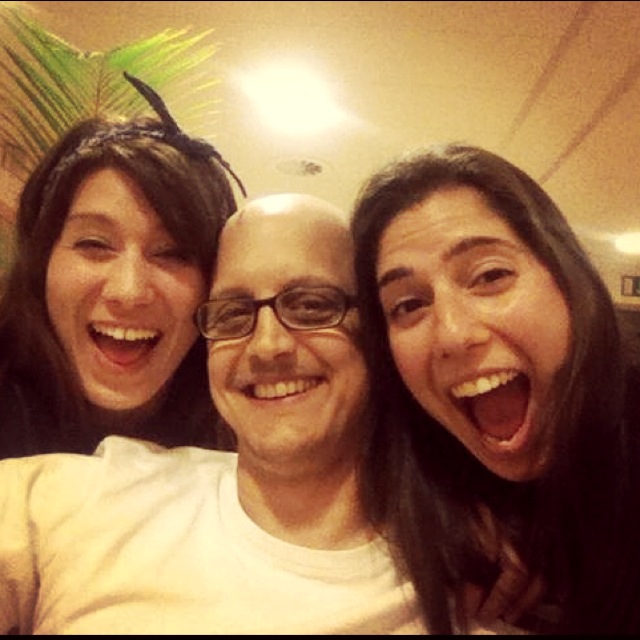 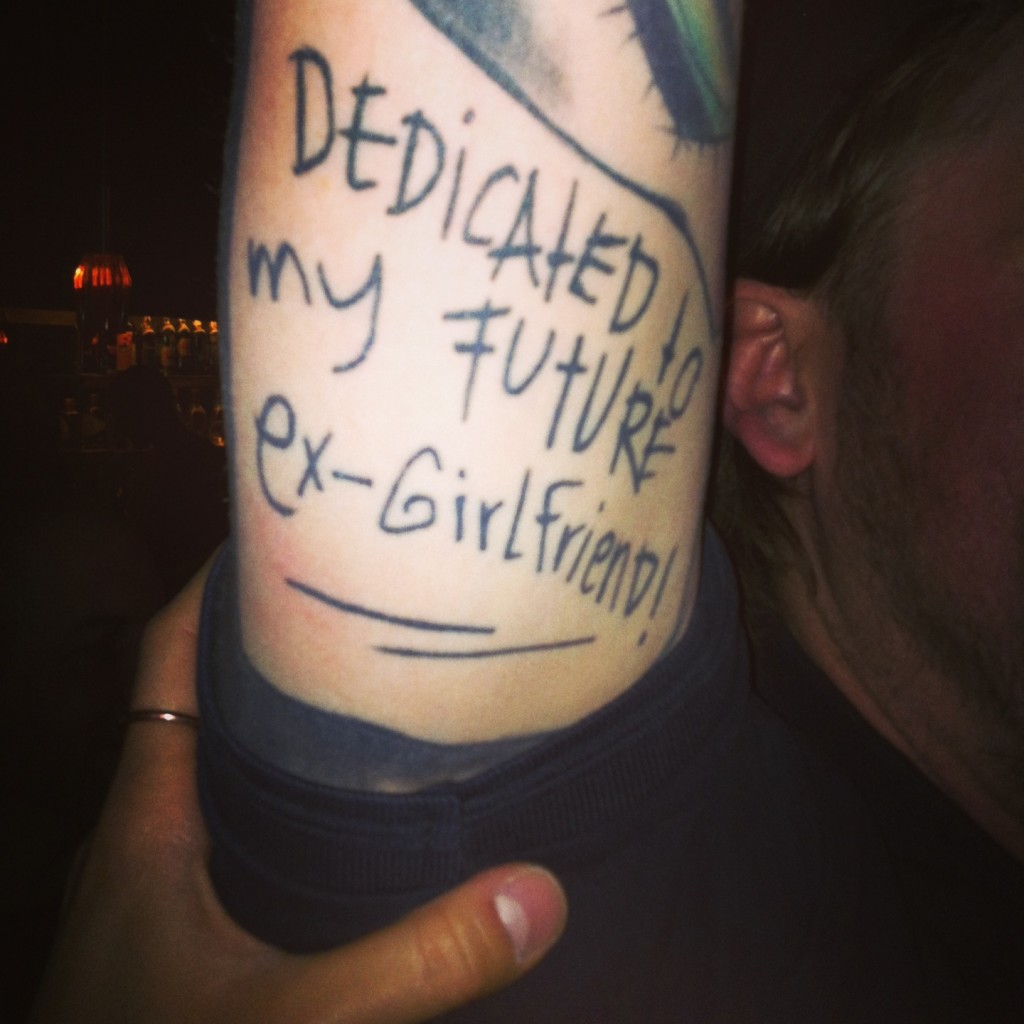 Saturday was the day. We woke up with a painful hangover (this seems to happen a lot to me in Germany) and headed to the Concrete Wave Skateshop. Over there we met the crazy Austrian bunch (and one Englishman) including NISE staff Sebi Madlener, Nico Nührig, Philipp Mücke, pro-snowboarder Sebi Geiger & Theo Acworth. That was the beginning of a painful yet beautiful 24hrs together. 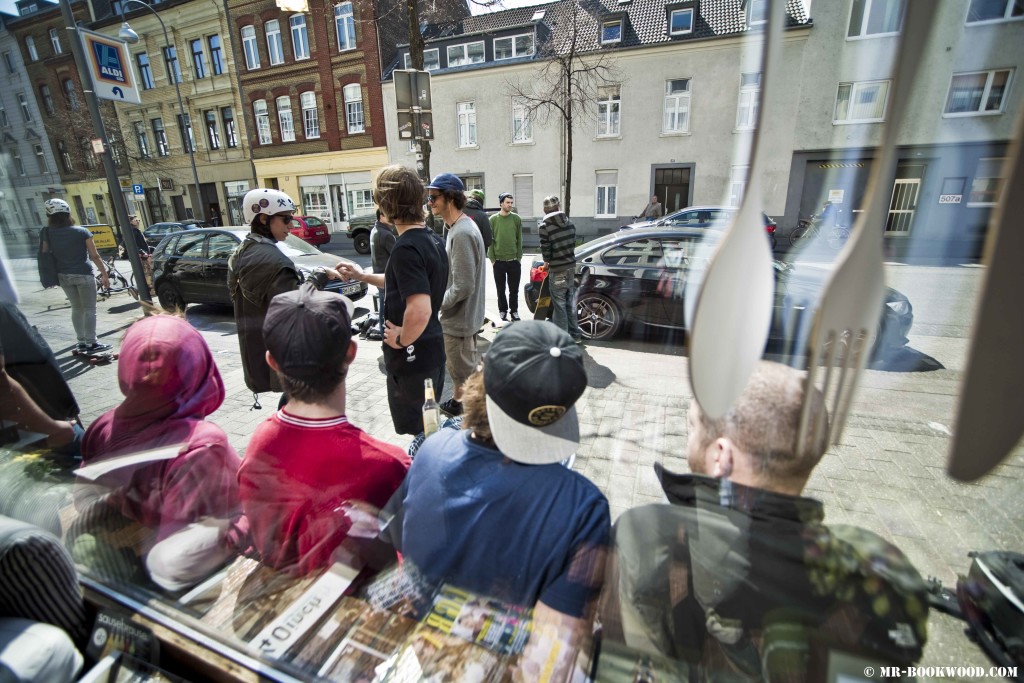 Hanging out with the Nise bunch at the CW shop before the event. Pic Mr. Bookwood 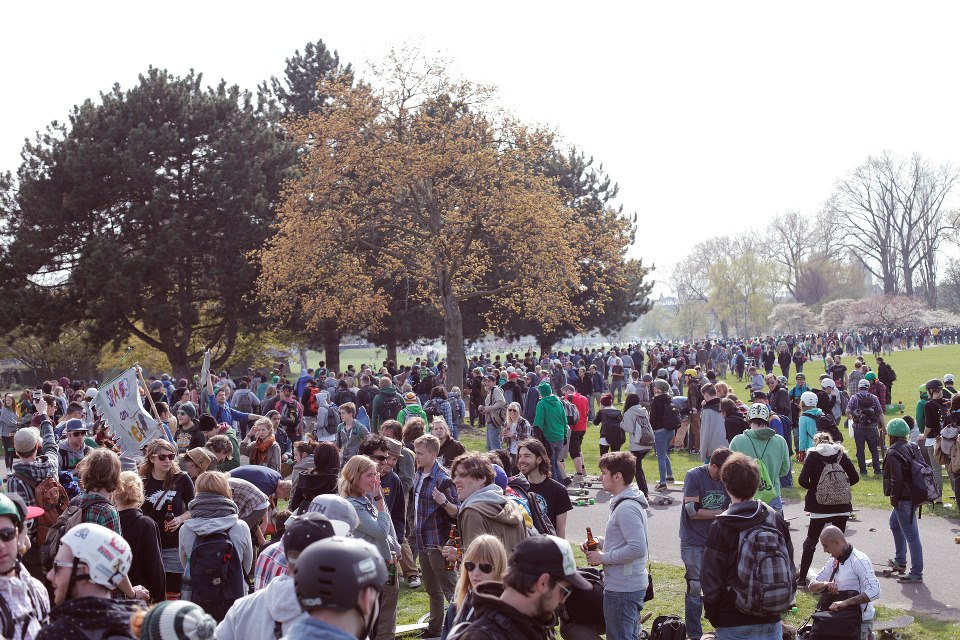 Before the official Greenskate cruising, we planned a German Girls Meet; so we met two hours before the date at Rheinpark to know each other, have workshops, games and loads of fun. It was such a great meet! So many girls together learning and being supportive with each other. Jan Krück did some amazing shots. To see the complete album click here 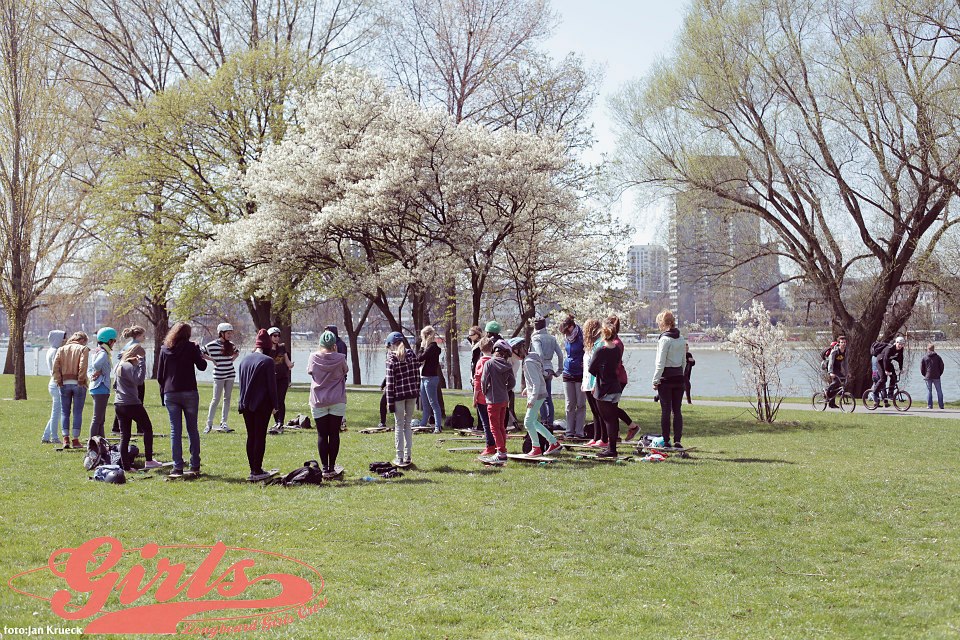 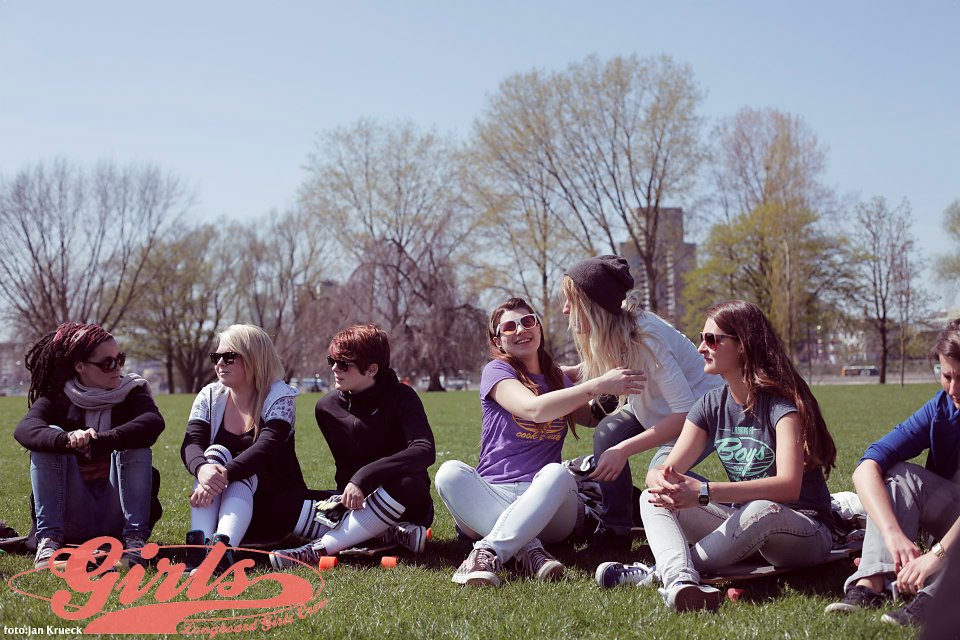 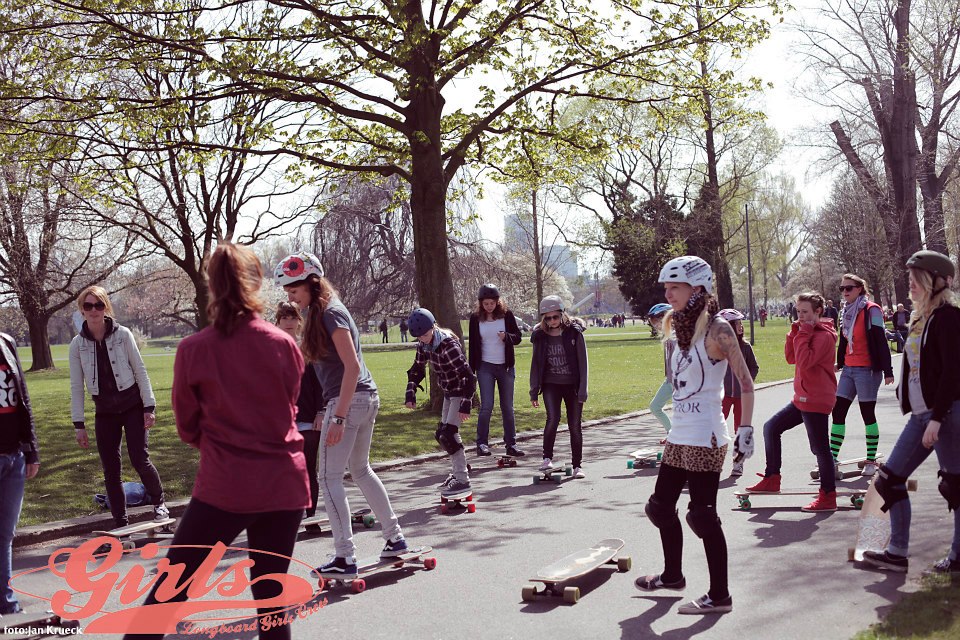 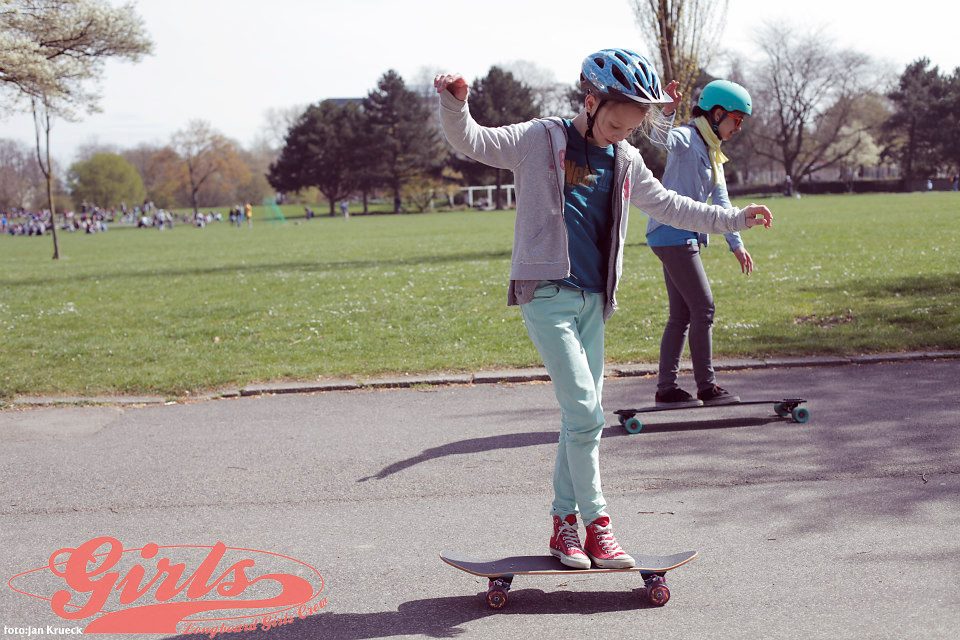 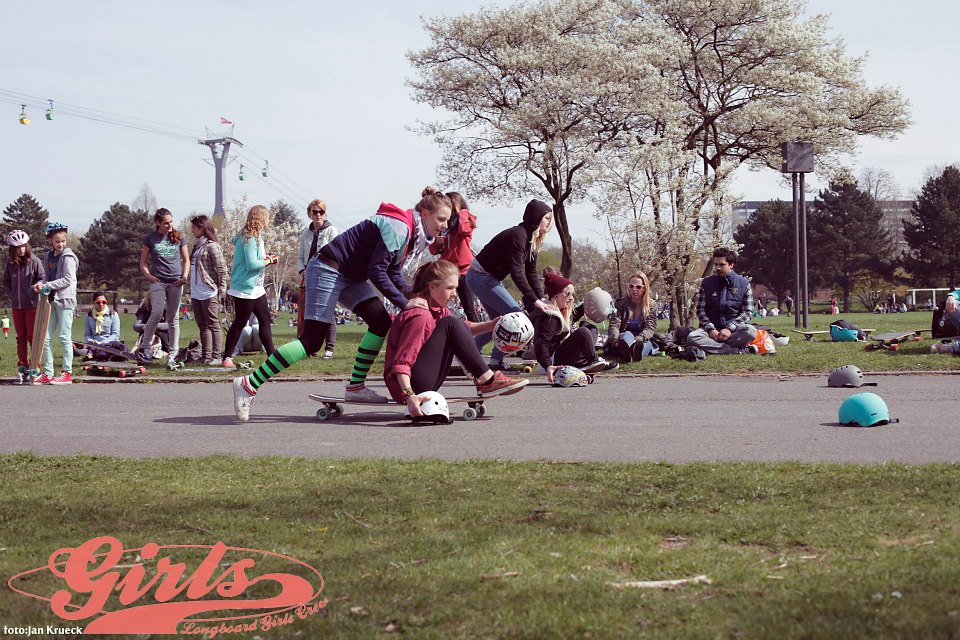 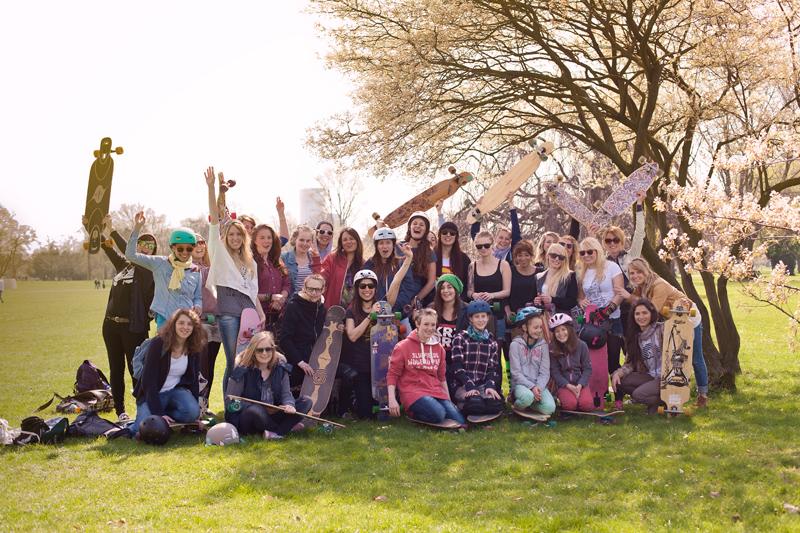 At 4pm and when we were done, the mass of people at Rheinpark was unbelievable. We started cruising around the city and wouldn’t stop until a couple of hours later, where we would talk with everybody and just have tons of fun. I’m no big fan of massive cruisings but this one was ace! We all met at the Cologne’s Cathedral Kölner Dom for the family picture and of course, some more beers. Did you know beer in Germany is cheaper than water? 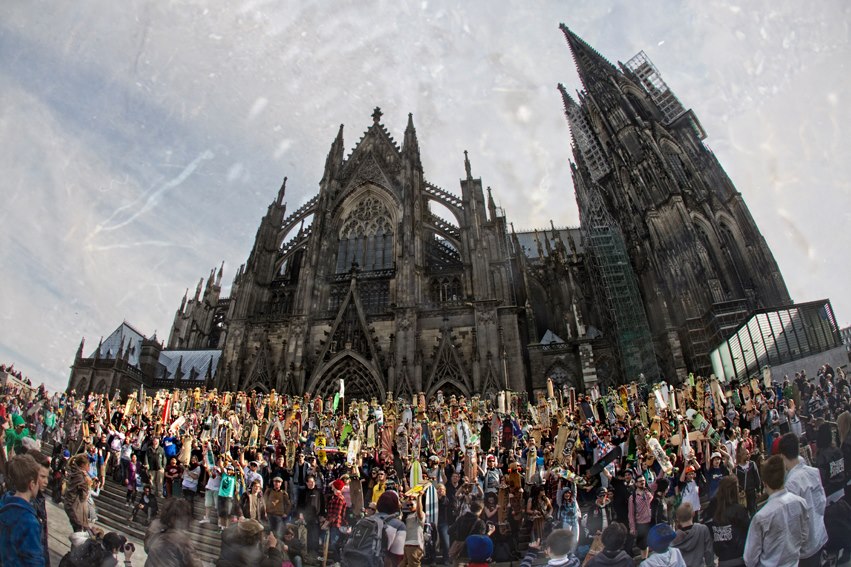 We went for some skating back to Rheinpark until 8pm when the NISE bunch was premiering their latest movie “Much More” starring Nico Nührig, Ville Hietala & directed by Sebi Madlener in the Museum Ludwig am Dom’s Filmforum. The movie is just epic. Outstanding photography, film & edit by Sebi Madlener and Nico’s skating is terrific. Here’s the treaser:

The night went by and before ending up in the classic Underground shaking our booties the Fav-8 (Janine, Dani, Theo, Nico, Sebi Mad, Sebi Geiger, Mücke & myself) went through a sort of spontaneous circumstances including the casual contemplation of a saxophonist outside the Cathedral, Mücke randomly acting like a cat with strangers (?) dinner at Mc. Donald’s (gross), a fast night-cruising through the streets of Köln, several subway rides with extravagant locals, a beer bottle explosion, a stop at the guys’ place for I don’t really remember but I do know we played piano and table soccer and tons of inappropriate conversations. Everyone from Greenskate was at the Underground and party was assured. I have the theory that beers in Germany come with a Jagermeister shot. You can deny it, but that’s my experience so far. It was a lovely night.

Sunday was day two of a lovely hangover and we went to Rheinpark for some skating. We had such a wonderful time despite the cold! Hanged out again with my friends and met some of the locals I haven’t met the day before. So much fun. 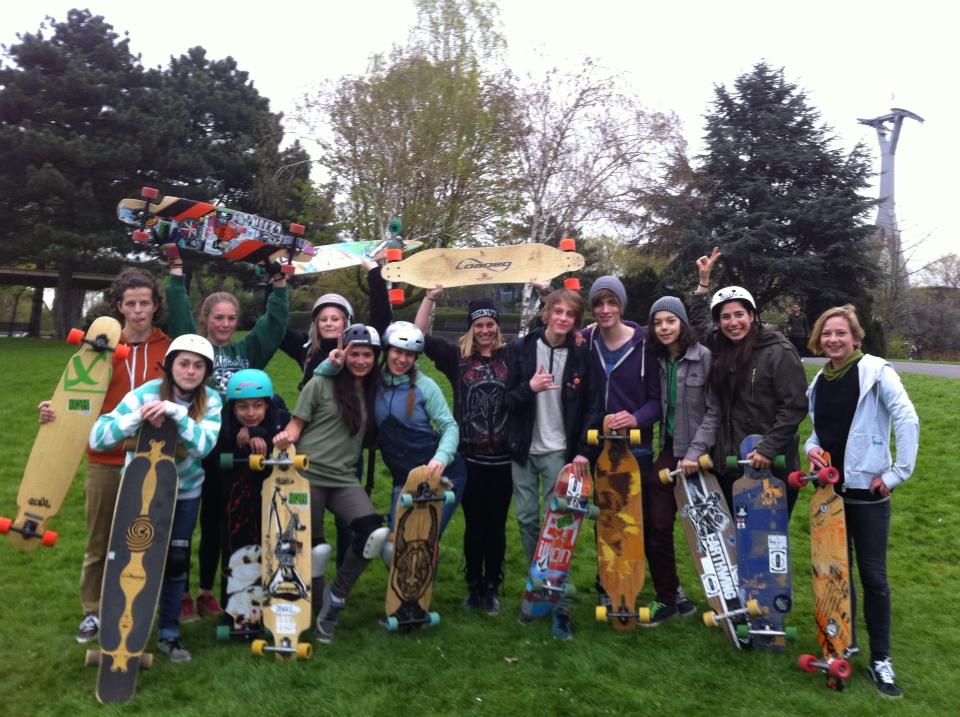 My flight home was cancelled due to a strike in Lufthansa (they didn’t make their usual impression on me this trip, that’s for sure) so I stayed on more day at Janine’s and we went to surf movies night (they screen short surf films or videos in a regular cinema) which was super cool followed by our mandatory stop at the Underground for a beer and of course, some late night kebab.

Janine was the best possible hostess, so thank you my friend for all your love and awesomeness. Thanks to Heiko from Concrete Wave Skateshop Cologne for putting this event together, taking me there and supporting me as a rider. Big thanks to everyone I met during this trip and all the friends I saw from last years’. You are the reason I love Cologne so fucking much <3 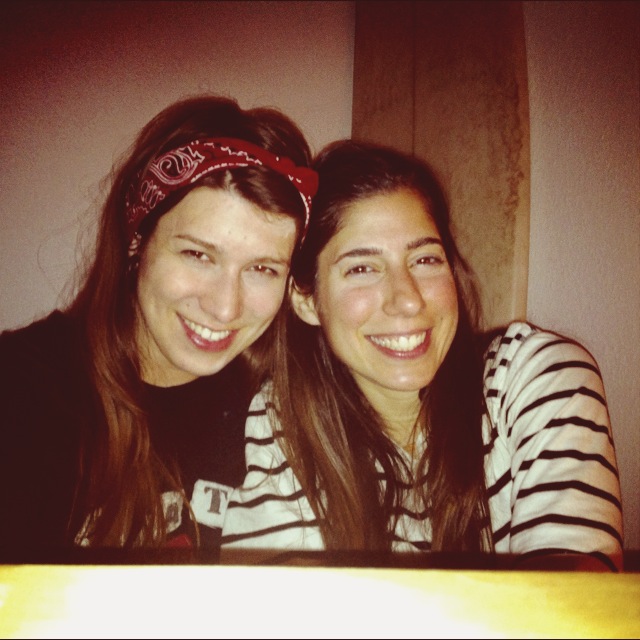 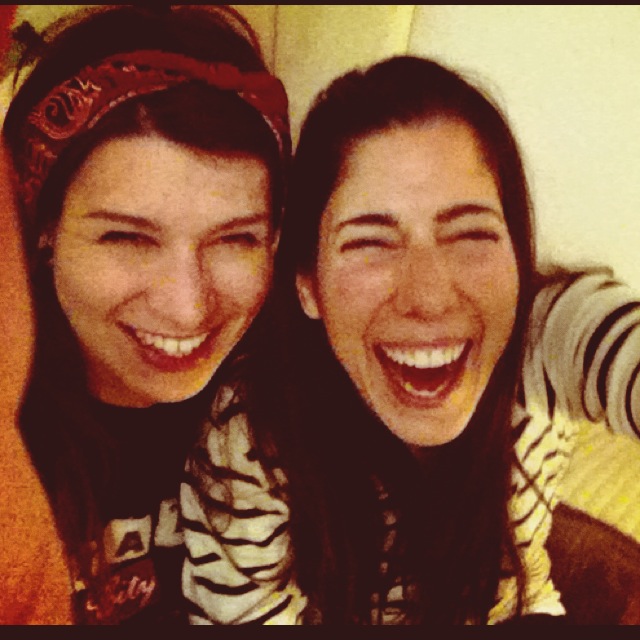 Big thanks to Jan Krück, Sebi Madlener & Mr. Bookwood for the amazing pictures.

This is Nise‘s version of Greenskate. Explicit language. Must see.

Greenskate Cologne 2013 from NiSE on Vimeo.

This is Christian Kneip version of Greenskate.

And this is how my shoe and foot ended up after all that pushing & partying. Mostly partying. 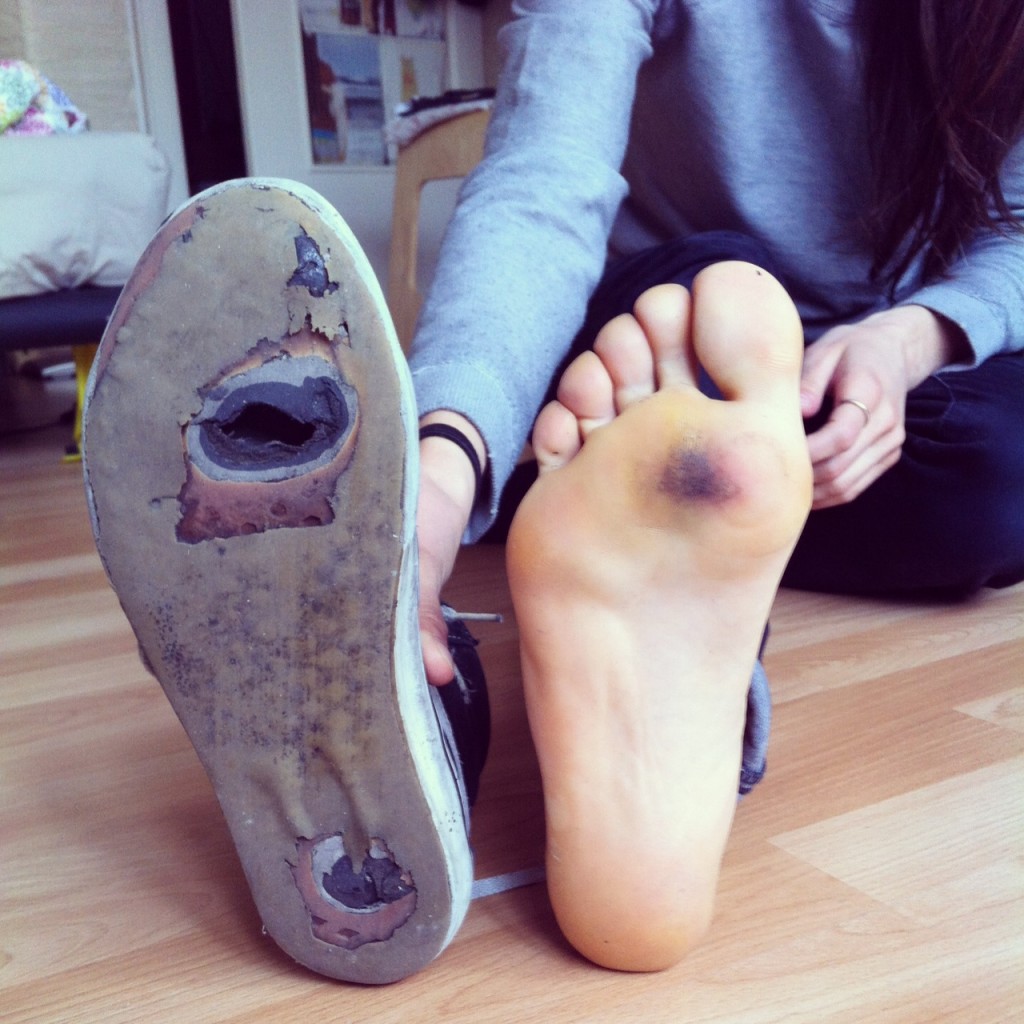 And in case anyone wondered, my bags and quiver made it back home. See you soon Cologne!