Hit enter to search or ESC to close
EventsLGCNews 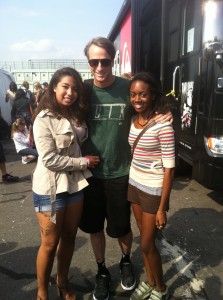 The best professionals in the surf and skate industry are showing off their talents through the Quicksilver Pro New York. I attended the first event of the festivities and was delighted to  find myself with backstage access to Tony Hawk‘s Vert Jam!

As a beginner longboarder I have only boarded in a ramp once.
As easy as it looks, it  was a little terrifying.  Like getting on a longboard for the first time, I was unequipped to  the

balance and speed needed to pump back and forth. Therefore, seeing the pros speed  through a massive half pipe was quite stunning.

The demo began on Saturday afternoon on the enduring Hudson River Park, Pier 54. The crowd  was nicely packed before the ramp and sprinkled  through with skate  enthusiasts happily carrying both skateboards, longboards and helmets.

Despite the tight squeeze a soft wind arose from the river, providing a comfort against our tingling nerves. A legend was in our midst…

Before Tony Hawk came out to perform, the event began with a finger skateboarding competition. When I was a kid my brother had one of those miniature skateboards. Had I known I could have won $5,000 at this event for doing tricks with my fingers, I probably would have played with it more. When asked, the happy winner of the competition said he would use the money to buy a skateboard. In the back of my mind I though, hundreds of skateboards!…Or even better…hundreds of longboards! 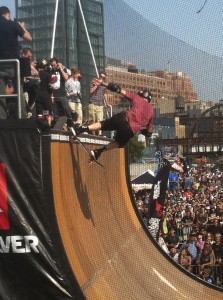 The event did not include a longboarding demo, however I was very excited to see many females and little girls carrying skateboards in the crowd.

When Tony Hawk dropped in for the first time,  it was nice to know that  the next generation of female boarders were being inspired by the icon of the skateboarding industry. His aerials and tricks  were enough to enhance everyone’s adrenaline and I became a little disappointed that I decided against bringing my longboard. Those performances definitely gave me the urge to shred around.

After the demo Tony Hawk and Kevin Staab were sweet and chill enough to meet me and pose for pictures! 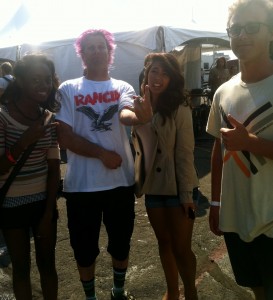 Being in the presence of Mr. Hawk is really hard to explain because he is more than a celebrity, he is a legend! He has inspired so many and long after his time people will associate skateboarding with his name.

I felt his and Staab’s energy and passion for skateboarding just by standing in their presence. After all of these years they are still doing aerials and putting on demos to share the stoke with others.

My compassion for the sport of  skateboarding and longboarding runs very deep. I am now even more enthused and ready to add some ramp practice to my skate sessions… Who is with me?